Flowers to Chase Away the Winter Blahs

Find this article at:
go.ncsu.edu/readext?446583
— Written By Al Hight and last updated by Roben Jarrett

Even though it’s still early, our gardens are beginning to awaken from their short winter slumber. I’ve noticed new growth on daylilies and roses already. If a bit of new growth doesn’t quite chase away your winter blahs, consider adding Japanese flowering apricot to your garden. It always blooms in January and February in shades of white, pink and red. 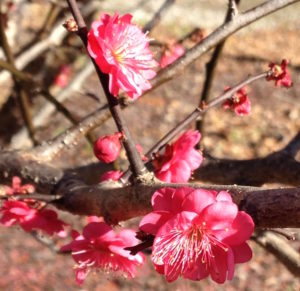 Japanese flowering apricot (Prunus mume) is similar in habit and appearance to some of the smaller flowering cherries that bloom a bit later in the season. Expect a small tree with a rounded branch structure reaching 20 feet or so. This winter wonder isn’t too fussy about soil as long as it’s well-drained. You will notice better growth and flower bud set in soils with a bit of extra organic matter; especially if your soil is very sandy. 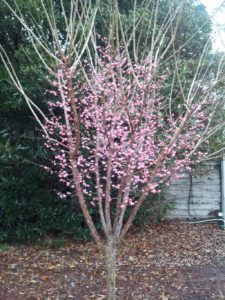 Full sun is a must for the flowering apricot. Even small amounts of shade will the reduce flower bud set. As the tree develops, lower branches are often shaded to the point that they die.

You won’t see this particular Prunus in every garden center, but it’s not impossible to find. The Japanese have been playing with this plant long enough to have more than 250 named varieties, but the choices in our neck of the woods are much smaller. ‘Peggy Clarke’ is a popular selection that bears double flowers in a deep-rose shade. ‘Kobai’ has red, semi-double flowers on a vigorous plant. Weeping selections such as ‘W.B. Clarke’ (double pink flowers) and several white-flowered forms are available. Most flowering apricots have at least some fragrance. 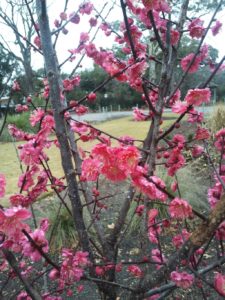 When we talk about anything in the Prunus genus, we usually begin a long list of pest problems such as white peach scale, peachtree borer and scab. It’s not impossible to see some of these problems on flowering apricot, but healthy trees don’t usually have significant issues. Trees that are grafted on peach rootstocks may be attacked by the peachtree borer.

We have several specimens of flowering apricot in the Display Garden at the New Hanover County Arboretum including ‘Peggy Clarke’, ‘Kobai’, ‘Alba Plena’ and ‘Matsubura Red’. 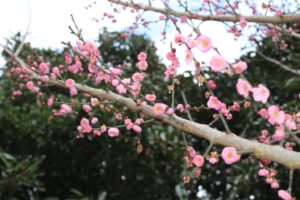 Japanese flowering apricot has never become popular because it blooms well ahead of most people’s bouts of spring fever. But, if you’re like me and always looking for something else to chase away those winter doldrums, this small tree is just right.

Other members of this genus that bloom just after Japanese flowering apricot are planted in the Arboretum including ‘Okame’, ‘Snowgoose’ and ‘Dreamcatcher’ flowering cherries and the hybrid plum called ‘Blireana’.