Masks are required to be worn in all buildings regardless of vaccine status.

Find this article at:
go.ncsu.edu/readext?413612
— Written By Al Hight and last updated by Roben Jarrett

Southern magnolias have already begun their summer show and the early-blooming crape myrtles like ‘Natchez’ won’t be far behind. Included are a few of the things I learned after observing these plants over the years.

Little Gem continues to be the most popular southern magnolia in the trade. There are some perfectly good reasons for that. It fits better into most gardens since it only reaches about 30 feet or so with a spread of 10 feet. Little Gem also blooms heavily at an early age. That’s something many of the southern magnolias don’t do.

Little Gem does require some pruning early in its life to form the dense canopy most people want.

Another smaller selection of southern magnolia that is catching on is called Teddy Bear or Southern Charm. With a slightly slower growth rate than Little Gem, a bit more spread and a nice form without pruning, Teddy Bear is a great choice.

The magnolia in the planting near the Education Center at the New Hanover County Arboretum (formally known as the auditorium) is Teddy Bear or Southern Charm.

Growing southern magnolias is pretty simple. Any reasonably well-drained soil works as long as the pH isn’t too high. Full sun will yield the most flowers but light shade can be tolerated.

Dropping leaves comes along with growing southern magnolia. Leave the lower limbs on the plants so you don’t have to constantly clean up the debris.

Here in hurricane country we have to be concerned about high winds. One of the great things about southern magnolia is that it doesn’t blow over because of its aggressive root system. 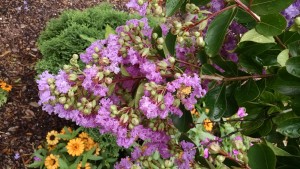 I like crape myrtles almost as much as a glass of $150 amarone, so it’s easy for me to get excited about the upcoming flower show. But, don’t discount the other ornamental qualities of crape myrtle like the gorgeous bark.

The best choices for exfoliating (peeling) bark are Fantasy, Townhouse, Osage and Natchez. Uplighting on a mature specimen of one of these might just make you forget about the flowers

East Carolina fans can show their purple pride with Catawba which has purple blooms on an 8 to 10 foot plant.

Try High Cotton if you need a vigorous white selection with pink stamens.

Miami is an excellent pink variety that reaches about 18 feet tall and not quite as wide.

You can find Catawba, Miami and High Cotton in the planting areas near Bradley Drive and the overflow parking lot.

The Delta series debuted several years ago with the pink Delta Jazz. Delta Moonlight is, of course, white and there are several other selections now ranging in color from light pink to lavender. We have several of these planted in front of the Ross greenhouse and in the Susan Hart Perennial Border.

Another group with intense leaf color is being sold under the Black Diamond moniker. These are also known as the Ebony series. You’ll find reds, pinks and a white selection. Although they are being marketed heavily at present, I don’t have enough experience with them to provide any insight.

All of the varieties mentioned have good resistance to powdery mildew and cercospora leaf spot.

The newest crape myrtle addition to the Display Garden is a Carl Whitcomb selection dubbed Double Feature. This dense, 8 foot tall plant covers itself in ruby-red flowers then sets more flowers without forming seeds. We haven’t had it in the garden (planted in the perennial border) long enough to know if it will live up to the hype. We will know more as the hot weather arrives.

Growing crape myrtles won’t tax your horticultural skills. Well-drained soil and full sun are required for blooms. Any amount of shade hurts the flower show. You can even plant them in summer when they are flowering if you can keep them from drying out.

Stop by the New Hanover County Arboretum and check out the southern magnolias and crape myrtles as they put on their summer show.

We also have a few other email lists you can subscribe to.